Do You Seek Jesus? 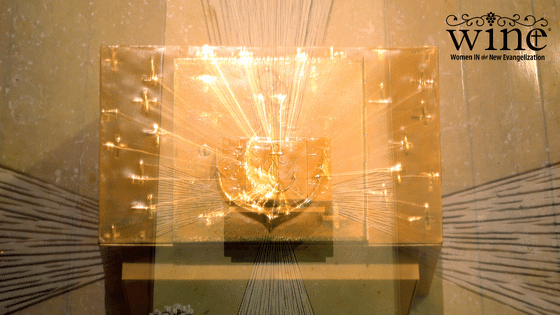 “Where is the newborn king of the Jews?
We saw his star at its rising and have come to do him homage.” ~ Matthew 2:2

A star inspired the Magi to follow its guiding light to the newborn king. This star illuminated their physical path towards the Radiant Light. We do not need to traverse afar to discover that same Marvelous Light. Jesus, present in every tabernacle of the world, can be easily found when we seek Him. The Magi’s visit, the Annunciation, the Shepherds’ visit, and St. John the Baptist preparing the way; methodically revealed Jesus as priest, prophet, and king to the world. God’s thoughtful, meticulous, life-giving actions in sending His firstborn Son to build His kingdom is a staunch comparison to Herod’s quick, selfish decision to slaughter the firstborn sons of his kingdom.

And where were they led? To Bethlehem, a place whose name means “house of bread.” Appropriate and no coincidence, as Jesus was born to be the Bread of Life. Even laid in a manger, a feeding trough, this beautiful symbolism should spark tremendous joy in those who still seek Him. God, who could have chosen to send His Son to earth in any way or stage of life, chose the humility of an infant. Jesus remains in the humblest of manners — in the Eucharist — under the guise of wine and, of course, bread.

The Magi came to “do him homage” and prostrated themselves upon entering His presence. A stark contrast to the mock homage the Roman soldier would offer during Jesus’ Passion (Mark 15:19). The Wisemen’s primary objective was to worship and adore him, whom they knew nothing but the foretelling of His kingship by the star. They were not merely glad to reach their destination but were overjoyed when they came upon the place where the star rested. What homage do we pay the Lord, especially in the Real Presence? Do we come in humble adoration, with head bowed and knees bent?

The Magi offered their treasure—bringing gold, frankincense, and myrrh. Gold represented Christ’s kingship. Frankincense, His divinity, and myrrh, His humanity. The Magi, themselves, embody an essential element of Christ’s mission. They exemplify the truth of Jesus’ birth, which was not only for the chosen people but for all people. Jesus is on a journey of seeking; he seeks to save all of God’s children.

Come Let Us Adore Him

Spending time in Adoration has been genuinely life-changing. Sitting in the church or chapel, in the quiet, before the Lord, the world hushes so I may quietly listen. In His presence, I come to know and believe He is my God—my Savior. I not only kneel and bow to pay him homage, but I rend my heart to Him as well. Then slip into the pew to spend time at the Master’s feet, learning and growing in faith.

The Magi offered their earthly treasures in the form of three symbolic gifts, but they also left behind duties and responsibilities to give Jesus the most valuable gift of time. Take heed of the Magi’s lessons—seek first the kingdom of God, pay Him due homage, and bask in His Glorious Light.

Jesus, may I always be one of the wise who seeks You—blessed, through grace, in our humility and faith, to recognize You truly present under the guise of bread and wine in the Eucharist. A foretaste of the heavenly promise of an eternity paying You homage.

Resolve to seek the Lord, at least monthly, in adoration of the Blessed Sacrament.

Allison Gingras is a social media and digital specialist with the Diocese of Fall River, Family Rosary, and CatholicMom.com. Kelly Wahlquist wrote the foreword for her "Encountering Signs of Faith: My Unexpected Journey with Sacramentals, the Saints, and the Abundant Grace of God" (Ave Maria Press). She created the Stay Connected Journals (OSV), including "The Gift of Invitation" and "Seeking Peace." www.ReconciledToYou.com