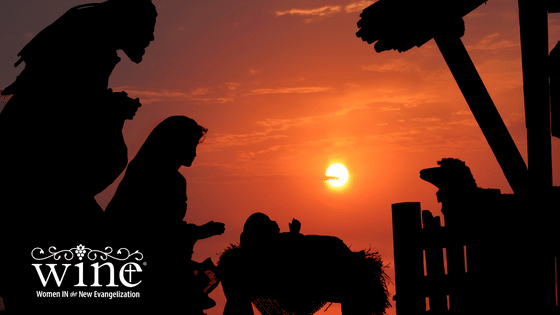 “The Shepherds went in haste to Bethlehem and
found Mary and Joseph, and the infant lying in the manger.”
~Luke 2: 16

I was at Mass at 11 pm with Benediction at midnight just last night. It was an excellent way to ring in the Octave Day of Christmas and the Solemnity of the Blessed Virgin Mary, Mother of God, and, frankly, not a bad way to ring in 2023 as well.

This Mass was a first for me, as in being at Mass when Midnight arrived for a new year. My previous New Year’s celebrations had more to do with making noise than singing praise. But there we all were in the quiet of the church in prayer. It felt like the whole universe was still, that all of creation was in prayer.

The Gospel reading about the shepherds was all the more beautiful in the dark. I’ve always wondered about the shepherds. Were there more shepherds that heard the angels but didn’t go to see the Christ Child? Did they possibly not go because they were tired, or just got the sheep settled, or didn’t recognize the meaning of the message? This idea makes me even more awed by the shepherds that went in haste to adore the Baby Jesus.

The shepherds, who were not considered anything like scholars, had just heard a message delivered by angels during the night about the Messiah being born. By having gone in haste to see Him, they let us in on something: they had known the story of Salvation History! They knew Israel had been waiting for the Messiah. They understood it to such a degree that it made sense to leave the safety of where they had settled for the night. Oddly, it made sense that they should awaken their sheep and lead them through the darkness, which could easily hide predators. Then, of course, they should go to the cave where the Child had been born and worship Him. Afterward, as they left the Holy Family, they were no longer just shepherds; they had become evangelists!

The darkness of that night was full of light and life. I was with the shepherds in the glory of this Mass in the middle of the night. We went to a little cave that held the universe, we met the Child, St. Joseph, and the Blessed Virgin Mary, Mother of God, and we adored. May I now imitate the shepherds in one more thing: as I leave the place of Adoration, may I carry the Child in my heart, and even though I am not a scholar, may I still become an evangelist.

The whole universe was held in the Mass last night and in the little cave 2000 years ago. It is an honor to have heard, to have gone in haste, and to leave with the praises of the Christ Child on my lips. Thank you to Mary, the Mother of God, whose fiat helped to fill the darkness with light!

Thank you for inviting me into the dark so that I may see the light!

Let me go in haste to meet the Christ Child in whatever little cave He resides in this year.