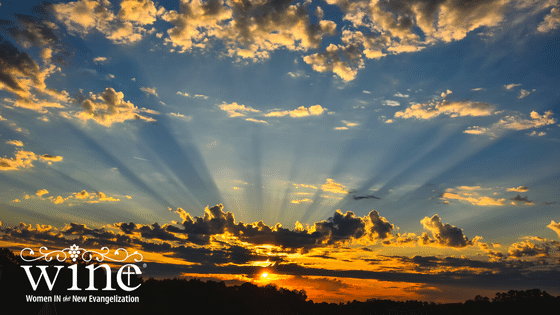 “Around the throne, and on each side of the throne,
are four living creatures, full of eyes in front and back.” ~ Revelation 4:6

In the first reading for today’s liturgy, John’s magnificent vision of heaven boggles the mind, so packed it is with vivid images of jewels, thrones, lightning, and flames. But what really caught my attention was his reference to the “four living creatures,” which were manifested as a lion, a calf, a man, and an eagle in flight, “full of eyes all around and within.” Now, where had I seen those before? I wondered.

But of course, I’d seen those depictions in churches from St. Peter’s Basilica in Rome, to Sagrada Familia in Barcelona, to my former parish church, St. Vincent de Paul in Austin, Texas. They represent the four evangelists who are credited with authorship of the gospels of Matthew (the face of a man), Mark (the lion), Luke (the ox), and John (the eagle). Although all four relate to the person of Jesus and his ministry, they often see the same events from different perspectives. And despite their distinctive views, all four gospels are enshrined in the canon of Scripture because they are all true.

I witnessed this same phenomenon at the recent funeral of the father of a good friend. The four sons of the deceased reflected individually on four different facets of their father’s character: his broad and lifelong education, his penchant for “meaningful work,” his devotion to family, and his humble but profound faith. The narrators illustrated their reflections with distinctively different, often humorous anecdotes—but no one could say they weren’t all true to their father’s memory.

Before the invention of contact lenses, the derogatory term “Four-eyes” emerged as a moniker for a person who wears glasses. But indeed, every disciple of Jesus could be called “Four-eyes.” Why? Because all those in Christ are given an additional set of eyes—spiritual eyes—that show us the supernatural, “God’s-eye view” perspective on the events and people in our lives. May we ever more skillfully learn to use both sets of eyes—natural and spiritual—to see the truth, beauty, and goodness that are all around us.

Dear Lord, help me to view with my spiritual eyes the realities that I often miss, especially in each person I encounter. Let me see the people and events of my life as you see them.

The next time you are tempted to judge a person or a situation superficially or prematurely, allow your “spiritual eyes” to take a second look.

About the Author: Sharon K. Perkins

Sharon K. Perkins is wife to Mike, mother of three adults, and a recent grandma. A 30-year veteran of Catholic parish and diocesan catechesis, nationally published columnist on real-life spirituality, speaker, and retreat leader. Sharon is the former Director of Evangelization and Catechesis for the Catholic Diocese of Austin, Texas, and a doctoral candidate in theology.