Why do we lift up the Cross? 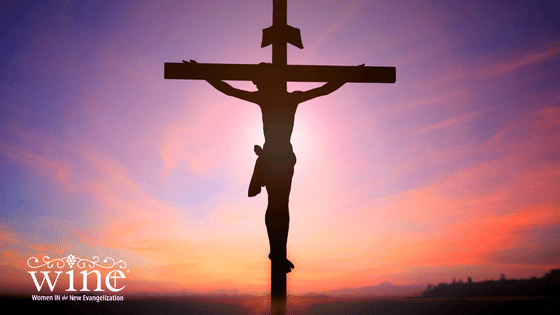 “he humbled himself, becoming obedient to death,
even death on a cross.
Because of this, God greatly exalted him “ ~ Phil 2:8

I once heard a nun tell about a boy who kept staring at her crucifix. “Sister, that’s a nice necklace you have there,” he said. But what’s that man doing hanging on that stick?”

The Cross is getting hard to explain in our increasingly non-Christian world. Like it must have been in Jesus’s day when crosses were an in-your-face, brutal reminder of human cruelty. No wonder St. Paul called Christ crucified “a stumbling block to Jews and folly to Gentiles” (1 Corinthians 1:22–23).

What is that man doing hanging on that stick?

How can we explain the Cross?

God must have known we’d need help understanding it when he had Moses lift an image of a poisonous serpent on a stick: if anyone bitten by the deadly snakes looked at the bronze serpent, they would live (see Num 21:4b–9).

Jesus himself used that image to explain himself to Nicodemus. “So must the Son of Man be lifted up, so that everyone who believes in him may have eternal life” (John 3:15).

The “snake on a stick” points to the paradox

That is the paradox of the Cross. That Jesus took sin on himself—becoming, in a sense, like the serpent—so that all the suffering and death it entails could be nailed to the cross and defeated, once and for all. With his death and resurrection, that sign of suffering has become a sign of triumph.

Today we celebrate that triumph in the Exaltation of the Holy Cross. Usually, we approach the Cross in sorrow, offering up our crosses with his. But today, we celebrate. We lift up his Cross in exaltation. Because everything it stands for, in an earthly sense—the worst the world can do—has been defeated! “For our sake he made him to be sin who knew no sin, so that in him we might become the righteousness of God” (2 Cor 5:21).

We adore you, O Christ, and we bless you, because by your Cross you have redeemed the world.

Take a few moments on this feast of the Exaltation of the Holy Cross to do just that: exalt it. How can you lift it high, not only as a reminder to yourself but to show his victory to someone else?

About the Author: Sarah Christmyer

Sarah Christmyer is the general editor of the Living the Word Catholic Women’s Bible and author of Becoming Women of the Word (Ave Maria Press). She speaks about Scripture and the Catholic faith and is co-developer and founding editor of The Great Adventure Catholic Bible study program. Follow her blog at ComeIntotheWord.com.