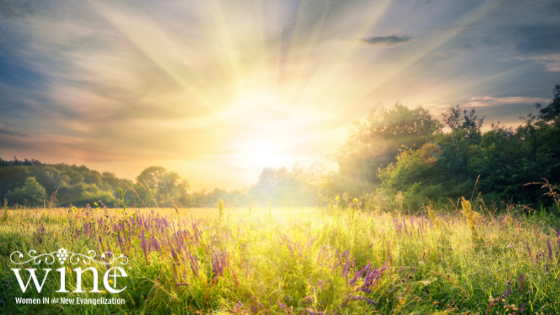 A great sign appeared in the sky, a woman clothed with the sun,
with the moon under her feet, and on her head a crown of twelve stars.
~ Revelation 12:1

This imagery of Revelation 12 in today’s first reading is dazzling, but since I live in the technology age, I can’t help thinking about it literally.

“Sun clothing” would be up to 27 million degrees Fahrenheit and would blind anyone looking at it. And half a century ago, astronauts had the moon under their feet, but they only managed to take a few steps.

A crown of twelve stars is also hard to imagine. The size of a single star, a massive sphere of gas, makes it impossible to consider someone wearing a dozen of them on their head.

St. John didn’t have our knowledge of space while writing down the visions that make up the book of Revelation, but he wasn’t thinking about those visions literally. Scholars believe the woman in this passage could symbolize the Church, Israel, Eve, or of course, the Blessed Virgin Mary. One beauty of the Catholic faith, often the answer isn’t “either/or” but instead “and/both.” As Pope Benedict XVI so eloquently stated,

“This Woman represents Mary, the Mother of the Redeemer, but at the same time she also represents the whole Church, the People of God of all times, the Church which in all ages, with great suffering, brings forth Christ ever anew” [General Audience, August 23, 2006].

To consider the Blessed Mother, Mary, around all those celestial bodies, it’s hard to believe she lived on earth. Meditating on her Assumption, the mystical moment her body entered heaven, it can be difficult to imagine that she ever dealt with everyday human problems.

However, Mary does understand what we go through, and we can trust and seek her intercession because, during her life, she followed her Son and experienced the Passion as a loving mother. Pope Benedict XVI said on the Feast of the Assumption in 2012.

“Our Lady, a full participant in the work of our salvation, follows in the footsteps of her Son: the poverty of Bethlehem, the everyday work of a hidden life in Nazareth, the manifestation of his divinity in Cana of Galilee, the tortures of his passion, the divine sacrifice on the Cross, the eternal blessedness of paradise.”

Mary can relate to the trials we face because she has suffered. She shows us how to unite our suffering to her Son’s. Put so beautifully by Pope Francis in his August 15, 2020, Angelus message,

“Mary’s advice to us, the Holy Father said, lies in her song, the “Magnificat” – “My soul magnifies the Lord.” “Mary ‘aggrandizes’ the Lord: not problems, which she did not lack at the time,” the Pope explained. She does not allow herself to be “overwhelmed by difficulties and absorbed by fears.” Rather, she puts God as the first greatness of life, which becomes the source of her Magnificat.”

St. John wrote about the glorified image he saw of Our Lady. But before that, he saw her in ordinary life when she lived with him after the Ascension. It may be hard to get close to a woman clothed with the sun, but we can confide in a mother who lived humbly and loved her Son to the very end. We can trust her to lead us to the Father, the Son, and the Holy Spirit.

Blessed Mother please be our comfort and show us each day how to love and grow closer to Jesus. Teach us to care for our families as you cared for Our Lord and St. Joseph.

Get to know Mary better by meditating on the mysteries of the Rosary—follow her life in Scripture. Read about her as a young mother in the first chapters of Luke, her involvement in Jesus’ first miracle in John 2, her steadfast love at the Cross in John 19, and her presence with the early Church in Acts 1.