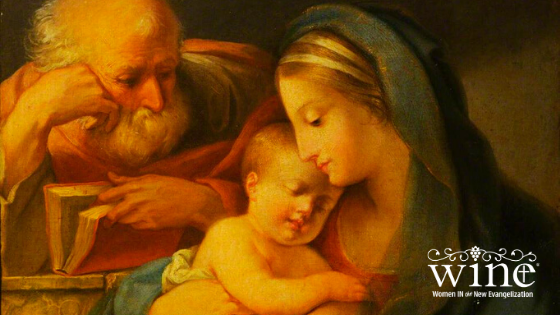 I came to Saint Joseph in the Catholic way of JMJ+. I had a vibrant relationship with Jesus that led me to Mary. And then, St. Joseph beckoned me.

The irony was not lost on me when, in this Year of St. Joseph, I was asked to offer a Lenten mission on St. Joseph at St. Joseph’s Church on and around the Feast of St. Joseph. As a convert of fifteen years from the Southern Baptist tradition, I am still exploring the riches of our family of saints, so I had considerable head-knowledge of Joseph, but little heart-knowledge of him personally. I understood the mission as a personal crooking of the finger from St. Joseph to draw closer.

As I learned to do with our Heavenly Father, the Holy Spirit, and Mary, I went to St. Joseph directly; I asked him what he wanted me to know about him the most and what he might want me to share about him in the mission. As one with a father wound, what he shared with me about his fatherhood has affected me so deeply and personally, I have fallen asleep every night squeezing back tears of wonder at the gift of St. Joseph to the whole Church.

By virtue of their masculinity, all men are called to fatherhood—the Old Testament burgeons with accounts of the great patriarchs’ lives and their covenants with God.

Joseph enjoyed his father’s particular “favor” as the youngest son of his old age (Gen 37:1-11), an ancient way of saying Joseph somehow possessed the privilege of birthright usually reserved for the oldest son.

We come to learn that this “favor” was prophetic through Joseph’s boyhood gift for dreams; while sleeping, he dreamed of situations involving primacy over his family. Joseph’s dreams were insulting to his brothers and violated ancient custom, yet after than a decade of betrayal, suffering, and formation, “his prediction came to pass and the word of the Lord proved him true” (Ps 105:19).

A severe famine ravaged the land, forcing Jacob and his family to Egypt for food. Egypt possessed food because Joseph (meaning “add, one who adds,” or “to increase”) had been made administrator to the kingdom in a miraculous, providential turn of events. He had foreseen the famine and “added to” the stores of wheat for the kingdom over a period of seven years.

Perhaps it is for these reasons (and surely many more) that Saint Bernadine of Siena asserted, “the patriarchs all terminated in St. Joseph,” the foster father of Jesus. He occupies a special rank among the saints in God’s Kingdom because he was so much a part of Jesus’ life and was in every way a true father to Him.

St. Joseph was the earthly refuge that welcomed and defended Mary and Jesus. Joseph received the secret of the Incarnation and of Mary’s virginity in a dream and spent his life protecting it. When Herod sought the Child to put Him to death, God sent warning through St. Joseph’s dreams and protection through St. Joseph’s body. According to Blessed Anne Catherine Emmerich, his fatherly love physically protected Jesus and Mary from robbers and thieves on the road to Egypt.

Joseph’s fatherly love carried Jesus to Egypt until all enemies were removed. On his arm, Jesus returned to Nazareth to be nourished and provided for by the labor of Joseph’s hands. Whatever a child owes to a father for all the benefits of his up-bringing and support, Jesus owed to Joseph because he reared Jesus, supporting, nourishing, protecting, and sheltering Him.

Prefigured by Joseph the patriarch, who kept supplies of wheat for his people and gave them bread for their bodies. How much greater is St. Joseph who nourished, and with the most tender care, preserved for the Church Him who is the Bread of Heaven and who feeds us unto eternal life in the Eucharist.

Father of the Church

The patriarchs were the heads of families of the Chosen People, and it was their honor to prepare for the promised Savior. Joseph belonged to the line of patriarchs, was one of the last descendants of the “house” of David, and was one of the nearest ancestors of Christ according to the flesh.

Under St. Joseph’s care and protection in his “house” at Nazareth, the redemption of mankind was hidden and prepared. As head of the Holy Family, therefore, the glorious title of patriarch falls by special right to St. Joseph, patron of the Church.

I knew these beautiful connections to the Old Testament patriarchs when I asked St. Joseph to share with me what he felt was most important for me to know about him. But what followed was a sort of personal review of my entire life in the context of this knowledge that pierced me to the core.

I came to see the innumerable ways he was present to me as a father, hidden and silent, since childhood, particularly that he was somehow behind my mother’s liberal provision of Bible storybooks throughout my formative years. I was made to understand that he enjoyed watching me take such pleasure in reading and imagining those stories of his own fathers and Son as a little girl.

I came to see how he continues to protect me through my husband, and I understand my husband’s role in our marriage better. I saw how he led and guided and carried me through the healing of my father wound and my understanding of authority at each painful step, so I could approach and truly love my Heavenly Father without fear. How he led me to the “wheat” of the Eucharist in the Catholic Church; and how he has been the spiritual father of my whole ministry, from the origin of the “dream” to the “increase” of its current state.

In short, what St. Joseph showed me was how largely he has stood with me as my spiritual father. As one with a father wound, I am still in awe and utterly humbled by his fierce combination of strength and tenderness for me, so that I have fallen asleep in his strong arms each night since in tears of wonder. St. Joseph is the earthly father I gave up dreaming and longing for, and he has stepped out of the shadows and into my life in the most surprising way. What a tender, thoughtful provision from God!

All that St. Joseph built, suffered, and accomplished was for us. He is not only a powerful and great saint in the Kingdom of God but a spiritual father to all of Christendom and mankind. His rank and power in the Kingdom of God is second only to Jesus and Mary, and far surpasses the dignity and honor of all the angels.

St. Joseph desires a relationship with us as our spiritual father. He deserves our very special veneration, love, and gratitude, especially in this Year of St. Joseph, a special privilege Mary and Jesus know and long to share.

Sonja Corbitt is the Bible Study Evangelista and creator of “the best modernization of lectio,” the LOVE the Word® Bible study method and journal. A best-selling author and Telly Award-winning broadcaster, her weekly show on radio and CatholicTV, and other Bible study resources are created to help you “love and lift all you’ve been given.” What’s an “evangelista”? Find out at biblestudyevangelista.com, where you can also catch her newest study series on St. Joseph as priest, prophet, and king of the Holy Family and the Church.

About the Author: Sonja Corbitt

Sonja Corbitt is the Catholic Evangelista and creator of “the best modernization of lectio,” the LOVE the Word® Bible study method and journal. A best-selling author and Telly Award winning broadcaster, her weekly radio and television shows, and variety of other unique approaches to Scripture, create space for busy Christians to hear and experience God through the Scriptures. Sonja writes for Magnificat magazine and the Ascension Press blog, and widely among other internet outlets. A lively and frequent guest on a variety of national television and radio shows, Sonja studies with Holy Apostles College and Seminary, home schools, and lives with her husband and boys in Tennessee. What’s an “evangelista”? Find out at biblestudyevangelista.com.