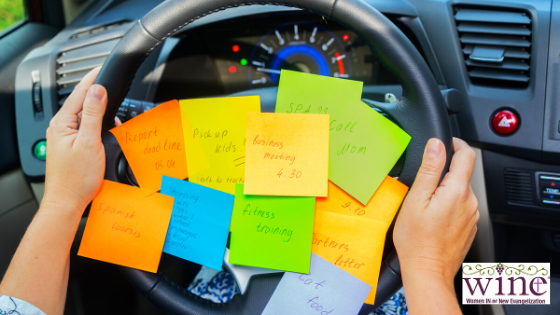 Hate. Don’t worry—no trigger warnings to worry about here, but yikes such a strong word. I’m sure the minute you read that word a super-charged current topic or two probably came to mind. So if hate is such a strong word and such a polarizing verb, why does Jesus use it in Luke 14:25-33 when he addresses the crowds following him saying, “If anyone comes to me without hating his father and mother, wife and children, brothers and sisters, and even his own life, he cannot be my disciple.”

As someone who grew up in a close family that went through a lot of challenges and was very involved in ministry and music together, I read that and was a little taken aback. Gasp? How could Jesus possibly ask me to hate my family members? They were my world. And now that I have my own little family unit, including three children, I can’t possibly imagine hating my humans. Fortunately, context is helpful, and Jesus goes on to explain.

Jesus compares life as his disciple to a couple of different scenarios. In one example, he asks if someone building a tower would recklessly build it without figuring out the cost of materials, cost of labor, and viability of completion. Similarly, he poses the question that if a king marching into war doesn’t calculate how many troops he will need to win the battle, how does he successfully achieve victory? Have you ever heard the popular saying, the lack of planning on your part does not constitute an emergency on mine? Is that what Jesus is saying, haha? As a mom, I know I’ve used it several times with my children, but is it really Jesus’ ultimatum? Is he seriously declaring, if you don’t put in the effort, then you being a disciple and entering the kingdom of Heaven is not my problem?

Okay, don’t panic, Jesus is a way more merciful savior than I am a merciful mother. It was when he concluded his address to the crowds with this final thought that it all made sense: “In the same way, every one of you who does not renounce all his possessions cannot be my disciple” (Luke 14:33). Our God is a God of order. In the same way, we prepare for earthly ambitions and achievements, we should also prepare for the Kingdom of Heaven by intentionally and thoughtfully becoming a disciple. And Jesus clearly spells out what that means.

In this Scripture, the word “hate” means “to love less” (Gen. 29:31-33; Mal 1:2-3). “Loving less” the things of this world and letting go of possessions are an essential part of the preparation for life as his disciple, and the possessions he’s talking about aren’t limited to just material things. We have to be able to let go of or “love less” everything or anyone else we rely on for security, self-worth, or even love, and to make Christ the center of our lives (Catechism of the Catholic Church, 1618). Anything, even if it’s an inherently good thing that keeps us from fully relying on God and living the life he’s called us to, prevents us from fully being his disciple. We have to be able to say, “He is it. Nothing else.”

This challenge is a difficult one. Being completely transparent I would have to admit I struggle with this daily. Join me for a moment in prayer to do an inventory of what we hold close to us that we need to “love less” so we can be better formed and better-prepared disciples of Christ.

About the Author: Lori Ubowski

Lori Ubowski is a Catholic musician, speaker, and author. She is part of the duo, Out of Darkness, leading worship with her husband, Adam. She recently co-authored Side By Side: A Catholic Mother-Daughter Journal (Ave Maria Press) with her daughter, Ava, and is a contributing writer in Our Friend Faustina (Marian Press).