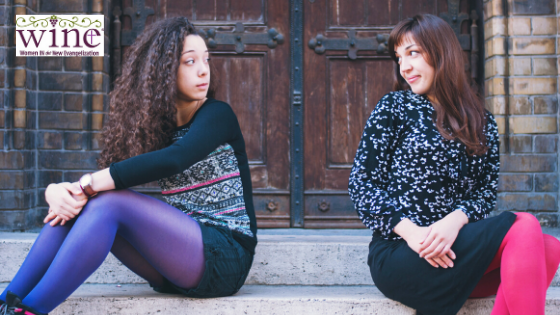 Sandy and I were in the smart kids’ math and English classes for seventh and eighth grade, and in the same Y-Teens group. We hung out almost every day the summer between eighth and ninth grades, riding bikes, going to the pool, seeing movies, participating in the library’s summer reading groups. We spent time at her house because it was nicer than mine, both in décor and in noise level.

And he said, “Woe also to you scholars of the law! You impose on people burdens hard to carry, but you yourselves do not lift one finger to touch them.” (Luke 11:46)

But then ninth grade came, Sandy started spending time with a different crowd. She started smoking and drinking, and for those of us who knew her from smart kids’ math and English, that made her a Bad Girl. No more shared experiences of riding bikes, going to the same slumber parties and the like. We’d nod in the hall, or ask about each other’s families, but that was about it.

One Monday morning in the spring, the school was agog about a wild night Sandy had had at the drive-in movies with some older boys. She said hi to me between classes, her face flushed.

And I cut her dead, just like all the other Nice Girls did that day.

Somewhere along the line, Sandy dropped out of school. I heard she spent time in prison on drug charges. A recent internet search turned her up living a few blocks from her childhood home, a neighborhood that’s not as safe as it once was.

I’m not saying that a smile or a kind word from me would have been life-changing for Sandy. But decades later, I haven’t forgotten the look on her face as I turned away from her. Nor I have forgotten, after I’ve behaved badly as an adult, the mercy shown by priests, women religious, and friends who had every right in the world to turn away from me. I hope I’ve learned that lifting a finger to help unburden someone, even when they’re in the wrong, can mean the difference between spiritual life and death.

How can you lift a finger today to touch a sinner?

Melanie Rigney is particularly grateful to a priest, now dead, who provided an outreached hand after a particularly stormy pastoral counseling season. Her latest book, Brotherhood of Saints: Daily Guidance and Inspiration (Franciscan Media), will be released later this month. Check her out at www.melanierigney.com.

About the Author: Melanie

Melanie Rigney finds that offering up her fears while saying the rosary is an effective weapon against God-dodges. Her latest book is Menopause Moments: A Journal for Nourishing Your Mind, Body and Spirit in Midlife (Twenty-third Publications). Check her out at RejoiceBeGlad.com