And Then One More

I was having a conversation with God this morning. We were discussing the things on my heart that were causing me anxiety. Then I brought up this pandemic and I told him we all need to calm down. But then I was telling him about the people who were turning and returning to Him and I asked Him to help all bring people to Him at this time. For relief, for joy, to ease our anxiety. And do you know what he said to me? He said “and then one more”.

I’d rather tell you in actions rather than words. I’ll never forget a friend of mine wanted to join the Catholic Church, and after she did, she told me she had wanted to join because she wanted the kind of faith life that I had. I didn’t think there was anything special about the life I had. My family went to church on Sundays. I prayed the rosary. I couldn’t pinpoint anything else, honestly. Then I started watching myself, especially as it pertained to my family and my church. I came to accept that she was right, but I didn’t see much more than anyone else. But today, I do look for ways to show my faith.

Yesterday, I wanted to go out to church to pray and to write, but I was running late to work. I had plans to come out and spend an hour in prayer, but I didn’t think I’d even have time to pray the Rosary. I drove towards church anyway although I knew that was the long way to work. Well, the Lord had other plans. There’s a guy that lives close to me who walks everywhere he goes. He’s a nice guy, just a loner. A lot of people will pick him up and give him a ride into town. Sometimes I do, but most of the time, I don’t. I saw him as I was heading towards church. My passenger seat was full of all kinds of things. I was running late. I can always give myself plenty of excuses. But for some reason I slowed down while I was throwing everything in the back seat and gave him a ride to town. I don’t think he was in my car for 5 minutes. It was really nothing. But, you know, as I was pulling up in front of church and he was hopping out, I got the strangest sensation. I told God I was sorry I couldn’t stop to pray today. I felt He told me that I had prayed, back there where I was decided whether to pick up Paul or not, and I listened to him because I threw everything in the back seat and slowed down to pick him up.

I challenge you today to pick somebody up, and to listen to what God is telling you. His message will get through amid all of the noise in our head.

And if we are inviting someone to develop a relationship with Jesus remember to ask another. He wants us to invite that one more. 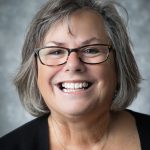 Cynthia Elder is a storyteller, writer and speaker.  She lives in Fancy Farm, Kentucky with her husband, Jimmy.  They are the parents of 4 children and 5 grandchildren.  Cynthia has a blog, www.faithfarmfamily, and has written five books.  Her newest book, “Do As He Tells You to Do” is due out in 2020.