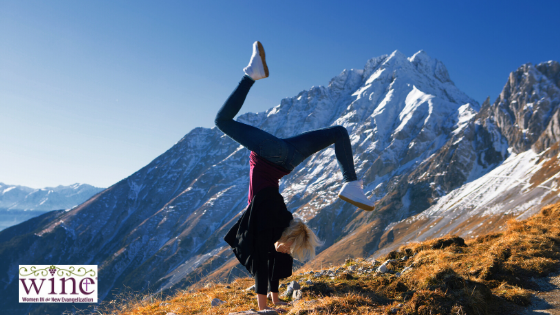 Although I’m not exactly athletic, I do spend quite a bit of time doing spiritual backflips. My days are filled with teaching Scripture to 9th and 10th graders; the students very often have incredible insights, which send me right up and over—spiritually, that is.

Along these lines are also my spiritual headstands, which allow us to look at a Bible passage from an odd perspective. A good one happened last week.  In Luke 7:36-50, Jesus forgives the sinful woman. She enters, uninvited, the home of a Pharisee, washes the feet of Jesus with her tears, wipes His feet with her hair, and puts ointment on them. The Pharisee points to her sinfulness. By way of answer, Jesus tells a parable about a creditor who forgives 500 denarii to one debtor and forgives 50 denarii to another.

A Simple, Not so Simple Question

He then asks a simple question—who will love the creditor more? The Pharisee answers that the one who has been forgiven more will love more. Jesus says that he has answered correctly.

Now picture me standing on my head—spiritually, of course. Then I begin to use the “what-on-earth-is-she-going-for” tone that my students know so well. First, I ask, “Is this saying what I think it is saying? Are we supposed to sin more in order to love more?” Even though it sort of seems that way to the students, they know that Jesus would never ask us to sin more. But they can’t quite figure out what He is saying.

Headstand with Me on This

So, I ask them to join me on my head; let’s look at this upside down. The denarii is really a monetary unit that means nearly nothing to us. Instead, why don’t we count it as something else?

One person was forgiven 50 denarii. What if we say that she allowed 50 denarii of forgiveness to enter her? The other was forgiven 500 denarii; that is ten times the amount. What if we say that 500 denarii is the full amount that you could ever be forgiven? So, would Jesus be saying that some people just don’t get to be forgiven as much? Nope. Then what is it?

Perhaps we have all been at the 50 denarii confession. Believing you are forgiven yet still a bit upset with because you’ve been confessing this for years and will probably end up confessing this next time. Here I go again, pass me a stick so I can keep beating myself up.

My students know; I’ve seen them in line for confession, and they have seen me. We all know the difference in the denarii. It is not that we should sin more in order to love more; instead, it is that we should allow all the forgiveness, all 500 denarii of forgiveness, and when we do, we have a wild freedom to love!

And, it is so good that it causes me one more giant backflip—spiritually, of course.

Alyssa Bormes is an educator, author, speaker, and retreat leader. She currently teaches at the Chesterton Academy in Edina, Minnesota, writes for the Catholic Spirit, and the WINE blog, is the host of a weekly show, “Catholic Kaleidoscope,” on Radio Maria US, and is the author of The Catechism of Hockey. You can find her at alyssabormes.com.