ON THE THIRD DAY OF CHRISTMAS. . . 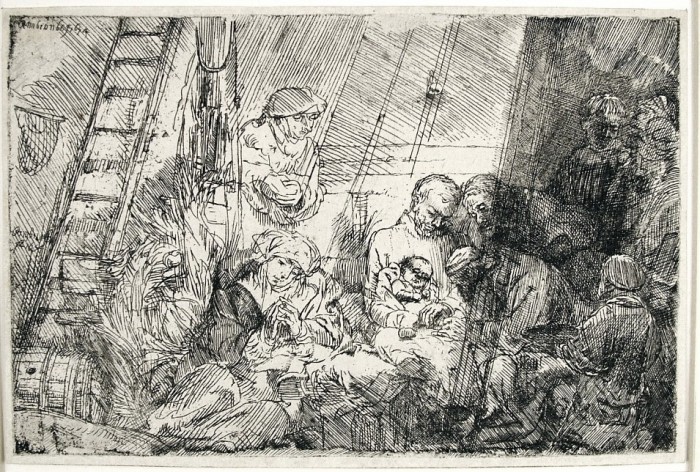 “The Circumcision of Christ” by Rembrandt.

Being only three days old, the tiny infant Jesus is hungry and like all newborns is being fed night and day.  Because of the shepherds’ report, there is a constant stream of visitors.  As everyone knows, shepherds are notorious for creating wild tales of the happenings during the long eventless nights on the hillsides with the sheep.  They spin their sagas of robbers and wolves and bears, always exalting themselves as the savior of sheep.

This time their story is different.  These people dwelling in Bethlehem have seen a great light.  Granted it was the shepherds’ most outrageous story yet.  Angels appearing in the night. The Glory of God shining around them.  A Baby lying in a feeding trough.  Yet, heard in the voices of those night watchers was the sound of truth.  This is the true Savior of the sheep.

The beautiful mother appeared in no way discomforted by her conditions.  On the contrary, she glows with a reflected radiance from the Baby himself.  The father, so strong and protective, is already thinking of the next event.   For in five days He would be circumcised and His name, Yeshua (Hebrew: God saves), would be declared.  Joseph would take care of all these details, as it could be overwhelming for a young mother in Israel.

It certainly was for me. In 1976 I was a young mother living in Israel near the road that runs between Bethlehem and Jerusalem.  Our first son, Nathaniel, had just been born and being in the Jewish State of Israel, his circumcision was proposed to us.  My immediate response was, “I will think about it and perhaps somewhere down the road we will do this but it is way too much to consider right now.”  I did not know how long we would live there, if our children would grow up and go to school there.  In a word, it was overwhelming.

Then the following facts were presented to me.  If a circumcision is ever to happen, it is best done on the day God told Abraham to do it – the eight day of a baby boy’s life.   It has to do with the blood-clotting factor.  On the eighth day, the amount of prothrombin (a protein produced by the liver) present is above 100% of normal (the only day in a male’s life in which this will normally occur). Thus, the eighth day is the perfect day to do the circumcision as the Vitamin K and prothrombin levels are at their lifetime peak.  By waiting, this becomes a major surgery.  My husband and I made the decision to do it the Jewish way.

In Judaism, circumcision is the sign of the covenant with God just as baptism is for Christians.  A Mohel is a Jewish rabbi who performs this procedure.   On the eighth day of Nathaniel’s life, the Mohel came to our home.  He laid out his sterile cloths and instruments. He donned his prayer shawl.  Prayers were offered.  He took a gauze swab dipped in wine and put it in our baby’s mouth. . .

As a new mother effused with such tenderness after the birth of her baby, I was unable to stay in the room.  I was too sensitive.   And then, in a moment this 4000 year old reoccurrence was done.

On the eighth day, Joseph and Mary will hold their precious little son until He is to be given to the Mohel.   The Brit Milah (Covenant of Circumcision) is a great celebratory event in a Jewish family and as a Jewess, Mary had certainly witnessed this before.

But the Mother of our God knows what the Mohel does not.  Her baby boy was born to rescue and deliver. He is the Messiah.  In Mary’s heart, this is a most solemn event.   When Jesus is circumcised, it begins the trail of His shed blood that traverses thirty-three years to a hill in Jerusalem five miles from the place of His birth  . . . . and to all Eternity.

Mary was always there for Him.  From conception to the cross, she stayed with Him, praying until the end.  It is no wonder we pray for ourselves, “Holy Mary, Mother of God, pray for us sinners now and at the hour of our death.”

As we observe this New Year on the first of January, let us remember that the first day of the year marks the first time the Savior of Mankind shed His blood for humanity. On the calendar day of Jesus’ circumcision, we also remember the solemnity of His mother, whose pure and holy heart a sword is piercing.

HAIL MARY, FULL OF GRACE, THE LORD IS WITH YOU.  BLESSED ARE YOU AMONG WOMEN AND BLESSED IS THE FRUIT OF YOUR WOMB, JESUS.

O God, Melech Ha Olam, King of the Universe, who became flesh for us that we might participate in Your divinity.  You entered this world just as we do, entrusted to the love of a mother and father.  You experienced the fullness of human life opening the way for us into enter Your divine life.  Grace us in the coming year to know You more fully and love You more deeply.  Amen

Deborah Kendrick came into the Catholic Church in 2011 through her interaction with Catholics in ecumenical meetings though out Europe, where she was a conference speaker and led retreats for twenty years.  During her testimony, she says,  “The French Catholics just loved me into the Church.”  She was first ignited for the Lord at the beginning of the outpouring of the Charismatic Renewal.  With her husband William, a fine artist, and their five children they traveled extensively, living in France, England and Israel.  Deborah’s heart is to see people know and receive the love God has for them which encompasses a New Pentecost for the new evangelization.  “God is calling us closer in this hour. Open hearts bring an open Heaven.”  You can reach Deborah at jerusalempaintings@gmail.com