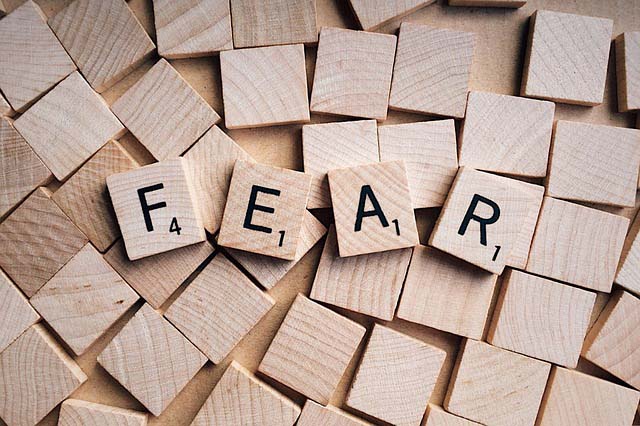 “What are you so afraid of?” my pastor asked after I’d come up with a million reasons why I couldn’t do some simple task related to my Parish Council service.

“Everything,” I said. It felt so good to finally say it out loud.

And I was, too. I’d been away from the Church for thirty-three years, and back in full communion for only a month when I ended up on Council. I was afraid that I’d kneel when I was supposed to sit. Afraid that I’d burst into tears at the enormity of the consecration. Afraid that, as had happened in second-grade CCD, I’d memorized the wrong version of the Act of Contrition. Afraid that the other Council members would laugh if I asked what “We are a Resurrection people” meant. Afraid that this childless, divorced, financially struggling mess of a middle-aged woman just wasn’t good enough for God. Check that—I wasn’t afraid of that. I knew it was true, deep in my heart.

“Whoever finds his life will lose it, and whoever loses his life for my sake will find it.” (Matthew 10:39, NAB)

Less than ten years earlier, everything had been perfect: a dream job that brought me public attention; a treasured husband I’d known for two decades; a four-bedroom house in an excellent school district; travel all over the country and in Europe. That life was lost in the space of a couple years due to a lot of mistakes by both of us and, I can see in retrospect, the lack of a faith-based marriage. In the aftermath, I took a job in a city where I knew only two people, and took on any freelance editing job I could find to pay the bills since nearly all my regular paycheck was going for repayment of a six-figure bankruptcy debt. Who wouldn’t be afraid?

That stripping away of all those external trappings had left me with nothing except the slim hope that God might still be interested in me. In my former big-shot job, I’d met a lot of writers who had tragic stories—the loss of children, deadbeat ex-husbands, chronic and life-threatening illnesses. The ones I most wanted to spend time with, it turned out, were Christians. It wasn’t that they cheered and celebrated all that pain, but they had a way of bearing it with confidence and grace. Even before my own life came crashing down, I started vaguely wanting to find that peace. Eventually, that led me to a Catholic church on a hot August week night in 2005, and I never looked back.

In the time I’ve been back with the Church, I’ve put aside some things that were even harder to lose than my marriage and that four-bedroom house: some pride, some envy, some anger, and at least a bit of each of the other deadly sins. I’ve learned that losing those parts of me draws me closer to the Light and the life the Lord desires me to live. I’ve found a life that is simpler in material goods, richer in peace, and more joyful even in the challenging times. I’ve grown to believe, no, to know He loves me. I’ve learned in Christ, there is no need to be afraid of anything.

Discern what in your life the Lord wants you to lose so that you can walk closer with Him.

Melanie Rigney loves her life in Arlington, VA, as it is today: writing about women saints (Sisterhood of Saints: Daily Guidance and Inspiration and Blessed Are You: Finding Inspiration from Our Sisters in Faith) and serving as a contributor to WINE, Living Faith, CatholicMom.com and other publications. She is also confident she will love whatever God has in store for the future. Check her out at www.melanierigney.com.

About the Author: Melanie

Melanie Rigney finds that offering up her fears while saying the rosary is an effective weapon against God-dodges. Her latest book is Menopause Moments: A Journal for Nourishing Your Mind, Body and Spirit in Midlife (Twenty-third Publications). Check her out at RejoiceBeGlad.com