To Our Unknown Gods 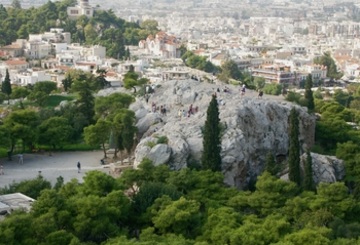 Then Paul stood up at the Areopagus and said:
“You Athenians, I see that in every respect
you are very religious.
For as I walked around looking carefully at your shrines,
I even discovered an altar inscribed, ‘To an Unknown God.’
What therefore you unknowingly worship, I proclaim to you.

The website “Sacred Destinations” contains fascinating information about the history of this place, otherwise known as “Mars Hill” (after the god of war). The Areopagus was where Athens’ governing body convened through the fifth century as it did in St. Paul’s day—at the foot of the Areopagus was a temple where those accused of murder could find sanctuary.

What does this story say to you, that a society with such a rich intellectual and religious heritage would hedge their bets by building a shrine to “an unknown god”? How did Paul’s reference to the dynamic God in whom “we live and move and have our being” fly in the face of a group of people for whom the deities were carved in stone? What does it say to us today, about the “religious” who see God as a mysterious, even unknown, entity—and those who call him Father, who have experienced the love of the God who dwells within our very hearts?

God, you have revealed your Triune Self to us—Father, Son, and Holy Spirit. Thank you that you are not unknown to us; by your Spirit, you have given us the power to proclaim you to the world. Help us to be faithful to that calling.