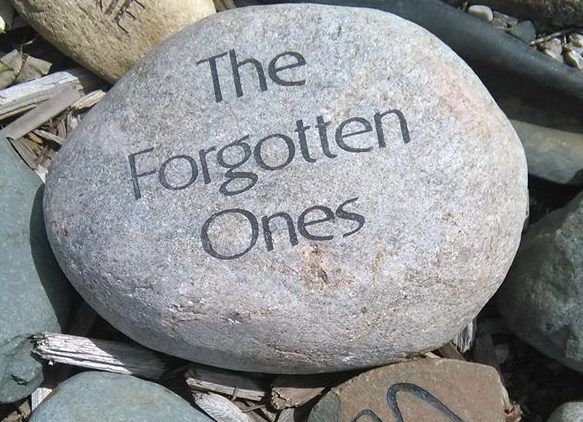 The Grandview Farm Baby Cemetery lies about 2 miles south of Divine Mercy Catholic Church in Faribault Minnesota.  The Cemetery is part of the Minnesota State Hospital System (most recently called the Faribault Regional Center that operated in Faribault from 1879 until 1998. Once called the School for Idiots and Imbeciles (and later called the Feeble-Minded School) in times when we had little sensitivity to the labels we put on people with disabilities, there are three cemeteries associated with that facility.  Two near the facility and one near a farm that the school operated in the early 1900’s.  Here, in this place with no individual markers, are buried the babies that were either born at the hospital and didn’t survive (Men and women were separated at the hospital but it is rumored that sometimes they did get together and pregnancy happened) or children who were abandoned at the hospital and left without identification.  It is also rumored that babies were buried there who were born to local women whom, because of the circumstances of their pregnancy, were too embarrassed or weren’t allowed to bury their children in an established church cemetery.

I went out to look at this cemetery last year  when I was working on the Garden of Mercy at Divine Mercy Parish in Faribault.  This garden is set aside as a place where all who seek mercy can find peace.  A section of the garden is dedicated to children who died either before or after birth for whatever reason whether miscarriage, abortion or illness.  As part of the garden, rocks with names of lost children are placed near the water feature.  Through this healing gesture, parents are asked to name their sometimes unnamed children, who lost before birth, may not have been given a name.  Three of the one hundred stones dedicated in the garden are mine. Jordan David, Katie Shea and James Kevin.

While looking over the list of names, I came across a request for a memorial stone for “The Forgotten Ones.”

Like the Unknown Soldier monument, this rock and garden is a spiritual resting place for al children who have dies. It is a place for unwanted children like those at the Grandview Baby Farm Cemetery,  or those who have suffered from abuse or are casualties of war or abortion. The garden is a place of healing for those parents and the parents of children lost to illness or accident no matter at what age because we know as parents, the natural order of things is that we die first.

The garden though is not a place just for memorials.  It is a place of mercy; a living place of love and forgiveness.

We are coming to the end of the Year of Mercy.  In the Bull of Induction for the Jubilee of Mercy, the Pope states that:

As we can see in Sacred Scripture, mercy is a key word that indicates God’s action towards us. He does not limit himself merely to affirming his love, but makes it visible and tangible. Love, after all, can never be just an abstraction. By its very nature, it indicates something concrete: intentions, attitudes, and behaviors that are shown in daily living. The mercy of God is his loving concern for each one of us. He feels responsible; that is, he desires our wellbeing and he wants to see us happy, full of joy, and peaceful. This is the path which the merciful love of Christians must also travel. As the Father loves, so do his children. Just as he is merciful, so we are called to be merciful to each other.

During the process of building the Garden of Mercy, women would come up to me to ask about having a stone put in the garden.  They would relay to me a story about a miscarriage and the ache they feel years later for the loss of that child.  A child without a name and forgotten by others.  One women who shared her story with me was in her 80’s.  She had held this ache for almost 60 years.

October is Pregnancy and Infant Loss Awareness month. We are nearing the end of the year of Mercy.  If you have lost a child through miscarriage, infant death or abortion. Seek His mercy. Remember “he desires our wellbeing and he wants to see us happy, full of joy, and peaceful.”

If you ache, seek help, talk to someone, dedicate a rock or memorialize your child in some way, walk through the Holy Doors, seek confession and live joyfully.

*The Garden of Mercy is located at Divine Mercy Catholic Church, 139 Mercy Drive in Faribault Minnesota. More information can be found on their website.  www,divinemercy.cc